There have been two dominating themes to the 2010 MLB season: pitching and blown calls. The divisional series playoffs started yesterday and embodied both sentiments immediately.

Philadelphia Phillies ace Roy Halladay threw a no hitter, near perfect game on Day 1 of the 2010 playoffs, solidifying this season’s motto, The Year of the Pitcher. Poor Cincinnati. After fifteen years without a playoff appearance, the Reds face the red-hot Phillies, and come away hit-less. Only one walk saved Cincy from being the victims of a perfect game. Now both teams have a day off to digest what happened. The Phillies will likely nurse their celebratory hangovers, while the Reds will take some needed batting practice.

This Year of the Pitcher thing is really keeping people’s minds off of steroids. Where are the performance enhancing police? The TSA doesn’t just randomly search airline passengers, they racially profile. Whether you like it or not, security has an eye out for those who fit the description of previous offenders. Shouldn’t this strategy be enforced in baseball? In addition to random steroid testing, shouldn’t the league flag performance jumpers and test them? Someone get Jose Batista and check his fluids, cause he became a monster and it could be natural, or it could be Popeye’s Special Spinach. We’ll call it, “Rachel profiling.”

Over in the American League, the New York Yankees took on the Minnesota Twins in a new stadium that yielded old results. Again, Minnesota fell to the Bronx Bombers. The Yankees came back and were victorious, making MLB executives cream themselves as they envisioned a pitching vs. hitting, high-ratings Philly vs. New York: Round 2 World Series. But there’s still a lot of baseball to be played, and, as it turns out, a lot of officiating errors to be had. 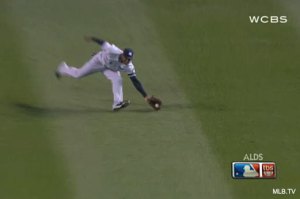 Greg Golson Makes Out 3 of 4 in the 9th Inning

Once again, baseball fans around the country watched on their large, high definition televisions as the officials blew another call. with one or two looks at the replay, the result of the play was clear. In the 9th inning, with two outs New York Yankees defensive specialist Greg Golson made a beautiful catch in right field, that was ruled a trap. The ball was not trapped, it was a clean play.

Luckily, there was no lasting trouble, in that the great Mariano Rivera got slugger Jim Thome out for the 4th out of the inning.

As this season has showed, umpires blink at the wrong time and miss important moments in the game. Major League Baseball has a lot of work to do this off-season, as it’s time to look at the big picture (literally and figuratively). But for now, fans will have to sit back and watch on jumbotrons, internet feeds and TVs, as officiating officially sucks.

This entry was posted on Thursday, October 7th, 2010 at 7:24 pm and is filed under Baseball, MLB, Sports. You can follow any responses to this entry through the RSS 2.0 feed. You can leave a response, or trackback from your own site.