I’ve Got Questions, I’ve Got Answers

MLB divisional series and NFL Week 5. I sit down with me to discuss.

Q: The Yankees swept the Twins in the playoffs again, how does this keep happening?

A: Not only are the Yankees the better team, but Minnesota hates the Yankees so much that it curses any chance they have.

Q: Who has more fun during a baseball game: Nick Swisher or Robinson Cano? 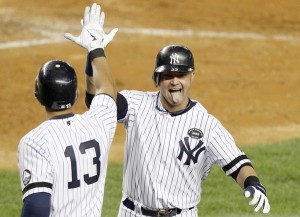 A: During Game 3, a throw hit Yankees first base coach Mick Kelleher in the crotch. Robinson Cano smiled while talking to the 63-year old. I can only imagine Cano saying something along the lines of, “well, you’re probably too old to have any more kids, anyway!” But in general, I have to say that Nick Swisher has the most fun of any Yankee, maybe even any baseball player in the entire league. You can tell because he has his tongue out a lot.

Q: Why do so many sportscasters say things like, “through the legs of Conrad” and “into the hands of Nicks” instead of, “through Conrad’s legs” and “into Nicks’ hands”?

A: Because they’re annoying. They should say, “through Conrad’s defective legs, again,” and “into the hands of Nicks, again”. The latter because saying “Nicks’ hands” is clearly too complicated for their feeble brains.

Q: Which was a more embarrassing loss for the Cincinnati Reds: Game 1 – being no hit by Roy Halladay, or Game 2 – causing 4 errors for 5 unearned runs?

A: Game 2, because there’s no excuse for fielding that bad. Jay Bruce didn’t lose that ball in the lights, he wasn’t even close. It was pitiful. Also, Roy Halladay is an incredible pitcher and it’s always worse to beat yourself than let another team beat you.

A: Yes, they did! I mean, the punter is still bad, special teams are “special” in that they are taking the short bus to the games, Eli threw two stupid interceptions, there were too many penalties, and the offense spent two time outs in places they shouldn’t have. But otherwise, they looked good.

Q: Howard Cross reported that Giants punter Matt Dodge looked great in practice, but seems to be unable to translate that talent to game time. What do you think the Giants should do?

A: Well, if he’s good in practice,  maybe he’d be good for the practice squad.

Q: Are you happy to see the Giants defense looking sharp?

A: Yes. I only wish they had known that the season started three weeks before they started showing up.

Q: What do you think of the invasion of pink for Breast Cancer Awareness month, shown in NFL apparel?

A: If they took all the money they spent on pink garb and donated to science, we could be many millions of dollars closer to a cure. However, with the unsightly addition of pink, the NFL has succeeded in making people feel anti-cancer.

Q: The Dallas Cowboys have started the season 1-3, and are at the bottom of the NFC East. How happy are you about this?

A: I’m thrilled! Thank you, Jerry Jones, for continuing to believe in Wade Phillips and Tony Romo, my favorite coach/QB combo since Andy Reid and Donovan McNabb. I can only hope that Dallas keeps losing and, eventually, I get to see Romo cry on the sidelines. Maybe someone can offer him popcorn to cheer him up.

Q: What do people in Philly think about Michael Vick’s injury?

A: It’s a doggone shame.

Q: Phillies vs. Reds NLDS Game 3 is on opposite Eagles vs. 49ers on Sunday night, what will Philadelphians watch?

Q: Did Eric Hinske jinx the Braves by excessively celebrating after his 2-run home run in the 8th inning to put Atlanta ahead, only for the tomahawk choppers to lose the game in the 9th?

Q: Which league has worse tattoos: MLB or NBA?

A: I don’t know, it’s tough to see most of the tattoos in NBA.

A: No. It looks like he went down on a Wooly Mammoth.

Q: If the San Francisco Giants pitched Madison Bumgarner and Tim Lincecum in the same game, what would you call that pitching combination?

This entry was posted on Monday, October 11th, 2010 at 2:38 am and is filed under Baseball, Basketball, Football, MLB, NBA, NFL, NY Giants, NY Yankees, Personal Foul, Sports. You can follow any responses to this entry through the RSS 2.0 feed. You can leave a response, or trackback from your own site.