Coaching from the Coaches Club

Enjoying a sweet hook up for the super pimped out Coaches Club at the New Meadowlands Stadium was an amazing experience that taught me why they call it the Coaches Club, and why it’s not worth $500+ per game (in addition to your PSL/small mortgage fee).

On a bright sunny day in the tri-state area, pleasantly surprisingly warm for late November, the New York Giants hosted the Jacksonville Jaguars (whose team sounds and kinda dresses like they’re paying homage to the Nickelodean classic Legends of the Hidden Temple) in an important “must win” winnable game.

Entering the Coaches Club, ticket-holders (not be confused with “fans”, who are found in the end zone, nose-bleed seats and at home) are marked with amusement park/club bracelets and given menus and rosters for the game. Upon descending to the exclusive food court under the seats, football is not the feeling. Instead, it’s like entering a super shmancy college cafeteria.

The numerous feeding stations constitute  most of the club that is shared by the center seats located above it. This is a $500+ amenity, so I gave it my full effort to eat as close to $500 worth of lobster claw and shrimp possible.

Even though my tickets fell to me through the corporate ladder, someone paid for them somewhere and I wanted that person/legal entity to get their money’s worth. Unfortunately, I fear I may not even have consumed $100 worth of crustacean because of post-Thanksgiving calorie-intake hangover.

For real hangovers, Bloody Marys and Screwdrivers are not included in the smorgasbord.  Alcohol is a separate charge, making the idea of consuming the ticket’s worth of F&B impossible. Also, it’s only offered pre-game and at halftime. That’s the policy, and if you don’t like it, you should spend the extra dough and get a private suite where drinking is still not included in the basic price.

All of this experience and politics didn’t change the fact that the Giants underperformed the first half of the game to a quiet crowd of visitors, with a lack of rabid fans. Jacksonville QB David Garrard ran around like a large and in charge Michael Vick, Maurice Jones-Drew kept every Jags drive alive and the Big Blue offense could only score field goals.

While Justin Tuck was giving a “we must protect this house” halftime speech, challenging the defense to play as if they were awake, I found the best part of the Coaches Club: a small patio area outside the front of the cafeteria where clubbers could stand about six feet behind the Giants’ players bench.

It was the worst timing for my voice to only be at 75%. Fortunately, I’m too loud even lacking full capacity and obnoxious to let this golden opportunity go. I needed to use my location ear shot away from the bench to do some coaching. And I did.

After Boss dropped another pass and I got an up close and personal view of the classic Eli Manning head shake of frustration paired with a disgusted sampling of water, where after one sip the taste of misery causes the franchise QB to spit, spill and spike the paper cup that dare try to comfort this man in his distress.

“Get him new gloves! He needs the sticky gripping ones! Who’s on equipment around here?” 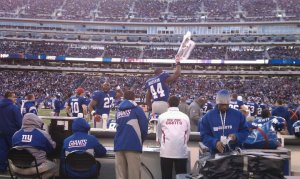 With the offense off of the field, I yelled to Brandon Jacobs to get Coach Tom Coughlin to put him and fellow RB Ahmad Bradshaw in on the same play at least five times a game. Both guys can block, it keeps the opposing defense on its toes… it really needs be done. He nodded in what I can only hope was a serious acknowledgment of my advice.

The two guys next to me laughed, and got the attention of RB Ahmad Bradshaw, who came over to give them a quick greeting. As it turned out, my friendly happy neighbors were Bradshaw’s cousin and BFF… more people in the clubhouse who didn’t personally pay their way in. This was starting to feel like the airline business felt when I learned that most people are non-revenue jumpseating friends or family of crew of that or an affiliated airline.

This was great! Instead of killing my remaining voice shouting to the bench, I told Bradshaw’s cousin in conversational tone to tell Bradshaw to tell Coughlin to start running the two-minute drill in non-two minute situations because the offense is so good at it.

As the Giants started to play like the hungry, talented team they should be all the time, with an offense that magically committed zero turnovers and a defense that remembered how great sacks and forced fumbles are for the cause, I progressed into a side conversation reiterating my benefit to NFL players as the Director of Logic and Reasoning, a position Roger Goodell is crazy not to create for me.

Bradshaw’s BFF informed me that there is corruption within the chauffeur service provided by the NFL to players to keep them from drinking and driving. Apparently, some drivers or people within the organization tip off cohorts to where they are going when with what players, causing planned robberies.

“What are they being robbed of?” I innocently asked.

“How much cash are these guys carrying?”

“What? Why? Who carries that much cash? Um, credit cards people!” My planned lecture series was going to need to allot for a credit over debit or cash segment.

“But your wife can see if you’re out on the town if you charge everything.”

That’s the concern! I broke it down to three simple reasons why that train of thought should be derailed:

With this newfound information, I will be drafting a resubmission of my request to the NFL to work as their Director of Don’t Mess This Up, a Slap Some Sense into Players production.

The goal of my lecture series is to turn around player behavior the way Justin Tuck turned the Giants around at halftime.

This entry was posted on Tuesday, November 30th, 2010 at 6:40 am and is filed under Football, NFL, NY Giants, Personal Foul, Sports. You can follow any responses to this entry through the RSS 2.0 feed. You can leave a response, or trackback from your own site.