Supermodel Gisele Bundchen is a gorgeous woman who probably never had the experience of being heckled until Sunday night, when the New England Patriots lost to the New York Giants in the Super Bowl again.

Gissy and Tommy Talk Through Another Tough Loss

END_OF_DOCUMENT_TOKEN_TO_BE_REPLACED

Five years after his retirement from the NFL, following a failed attempt at a broadcasting career and a scandalous divorce last

"I feel as young as the chicks I hook up with," - What Tiki Barber wants to say about coming back to football

year, Tiki Barber is ready to be a comeback story… but it may be a short story for the highly criticized almost-36-year-old.

END_OF_DOCUMENT_TOKEN_TO_BE_REPLACED

Coaching from the Coaches Club

Enjoying a sweet hook up for the super pimped out Coaches Club at the New Meadowlands Stadium was an amazing experience that taught me why they call it the Coaches Club, and why it’s not worth $500+ per game (in addition to your PSL/small mortgage fee). 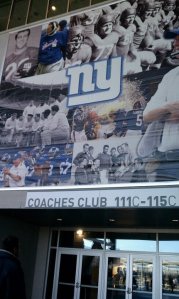